Just a few days ago, I participated in a unique, three-day hackathon across Barcelona, Paris and London, finishing up in the Mobile World Congress

I introduced it roughly a couple of weeks ago, just after the presentation keynote that was held a week before it. We knew the information about it, the timetables, what we were going to do at each moment, and the expectations were high. But obviously, there is nothing like living it yourself. Now, after a few days of settling in, I gathered enough time to talk about it.

We all met on Friday morning in front of the Mobile World Centre, right in Plaça Catalunya (Barcelona). After a presentation of all the staff members and most of the experts that were going to come with us inside the train to Paris, the 5000-minute countdown was just started. It all got even more real at that point. Then the three musicians sat down, eyes covered with a band, and started playing a nice cover of Dream A Little Dream Of Me. 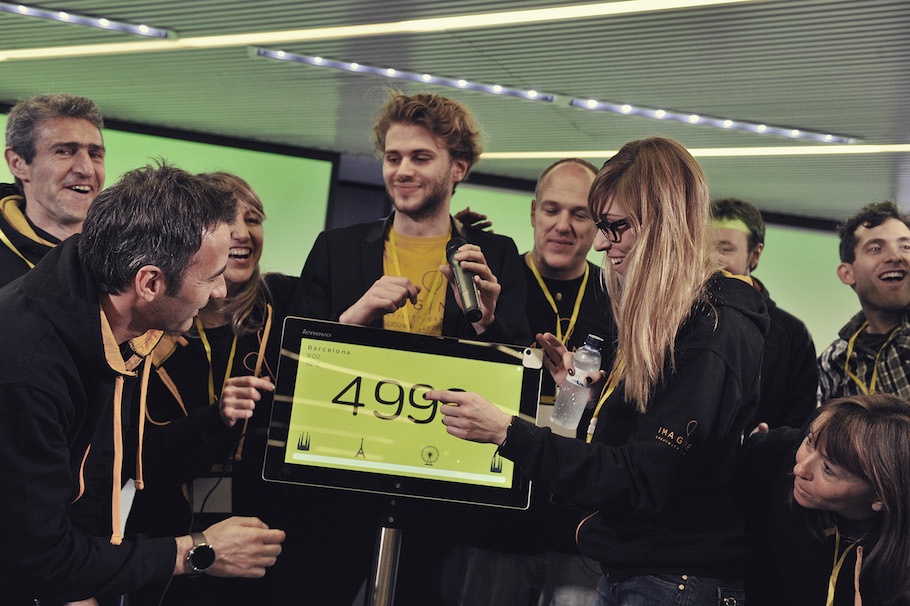 The first challenge was about to begin. We were 36 people participating, 12 of each profile (creatives, business people & developers), but no groups whatsoever. In that morning, we had to leave the building with all twelve groups completed and ready to go. So we basically used speed dating to solve that. While us developers were having a small technical talk about the demo and the challenges that we would face, creative and business profiles were meeting in order to know each other. After they set up twelve couples, we developers joined the crazy speed dating, finally forming all the groups. 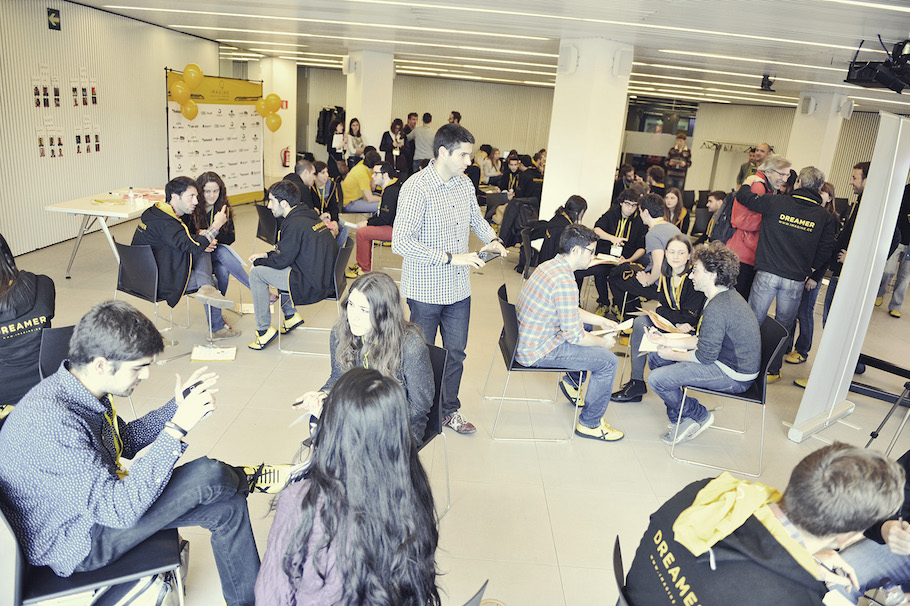 We quickly left the Mobile World Centre and hopped into a tourist bus. We went around the Poblenou district mostly, passing by the event sponsors’ headquarters, getting some rest before beginning our journey. After an hour of wandering around Barcelona, we arrived at Sants train station. We got some lunch, with not much time, and then headed to the VIP lounge of the station in order to perform another activity. Finally we went to our platform, and hopped into an AVE train that would lead us to Paris.

We had six hours ahead of us, and the purpose was to put the idea upside down, find the weak spots and reinforce it so we could focus on working during all Saturday. Following a specific methodology, we basically started exploring the idea and tried to find vulnerabilities by questioning quite everything. Everything, with a precious help from experts and other profiles that were in the train. After doing that, and having the idea in just little pieces, we focused on making it strong and ready for Saturday. 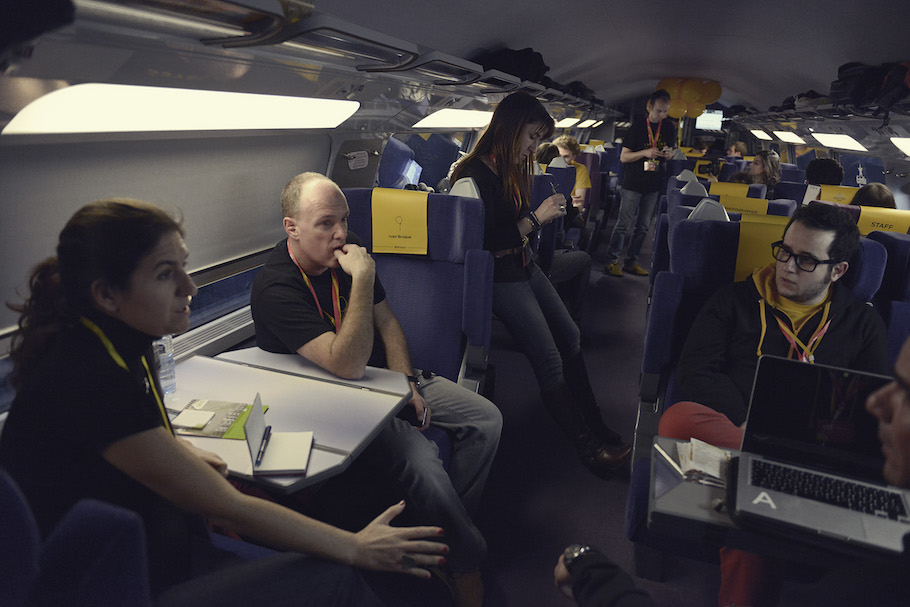 And we did. A bit before eleven, we arrived to Paris’ Gare de Lyon station. A bit exhausted, satisfied with the outcome of the train activities, and wanting some rest in the hotel. Two buses came to pick us up and a bit shy of an hour later we arrived at the Melià Paris La Defénse Hotel. Although some people stayed further developing the idea, I got to my hotel room and started the setup of the project I was going to develop the following day. 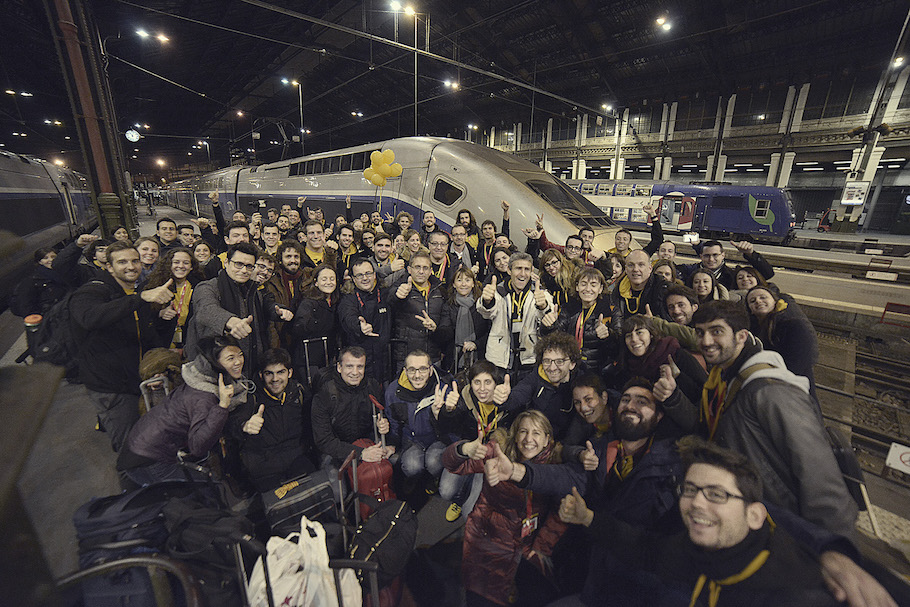 We woke up early in Paris. Some even went to run around the area, but that was too much for me. So I woke up, had a really nice breakfast and went to the hotel room that was going to host us for a whole day. There was a bit of a presentation, and then the real deal, the hackathon, started. And luckily it was not only me in the development team: both my partner & CEO at Quipu (Roger) and our art director (Hayk) were supporting me from Mataró. I put on my headphones, and for most of the day I was focused on developing the prototype as fast as I could. 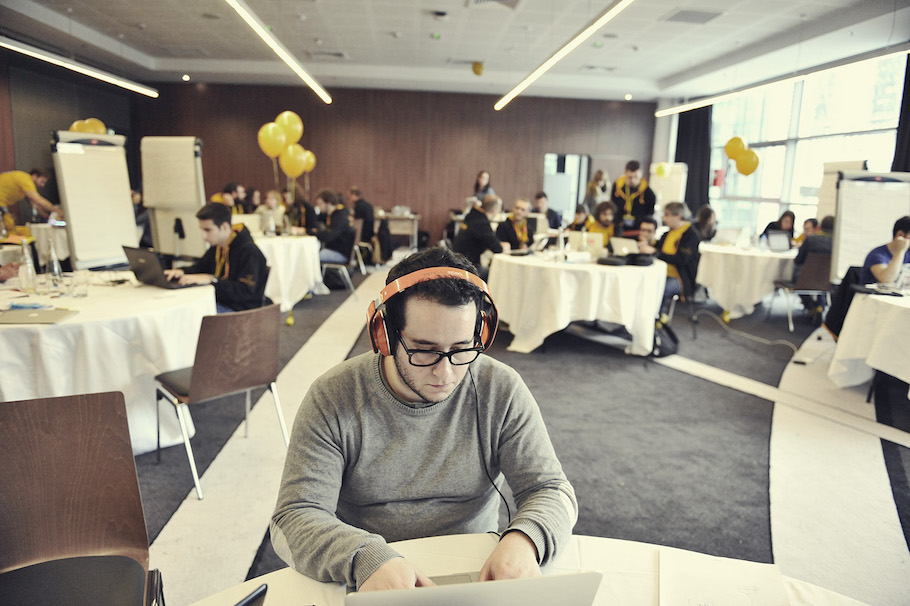 Hours went on and on, and we kinda hit a crisis point. We presented to the experts and part of the staff, and it didn’t go well. Me and my teammates hadn’t had much time to prepare for the presentation, were nervous and did not have some key points of the project clear enough to be defended in front of a jury. But it’s OK, it was just a test. We gathered together after that, sorted everything out, and further worked on getting everything ready for the demo. I began finishing the prototype, while my teammates rehearsed their part of the presentation. After all, around 3 in the morning and with a really nice product (both pitch & prototype), we went to sleep and get (some) rest. 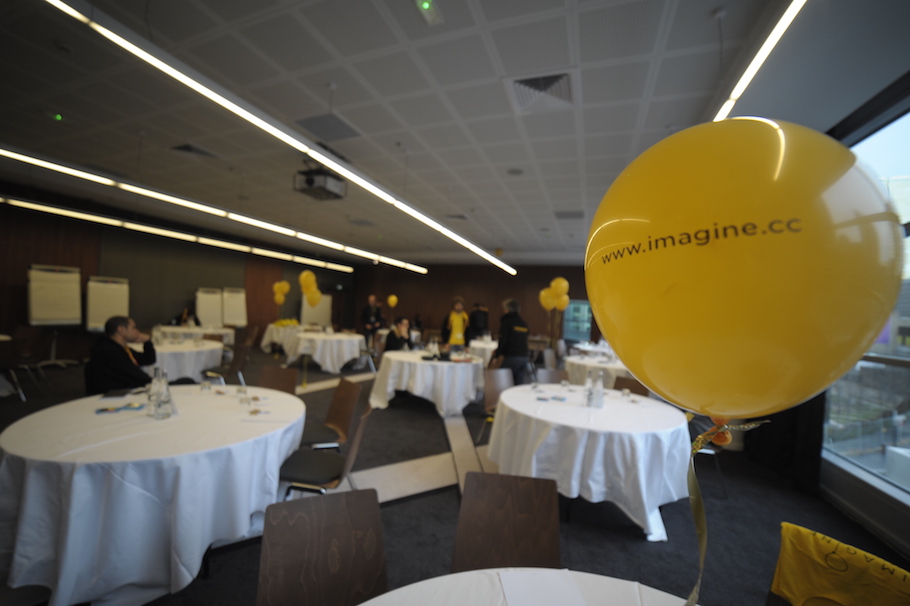 Sleeping was definitely not one of the key points of the Imagine Express. I only slept 2 hours before we had to take a bus to Paris train station at just 6 in the morning. We left the hotel, crossed the city again, and got inside a Eurostar train that would get us to London. I was really excited about being on an undersea train, but also too tired, so I was sleeping all the time inside the train. Anyway, a bit after nine in the morning (British time), we arrived at London’s St. Pancras train station. 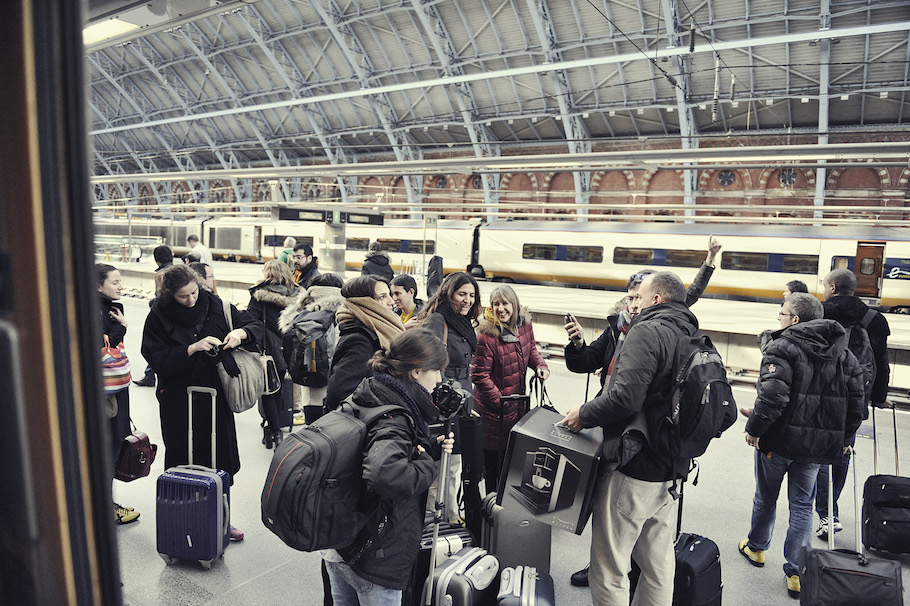 Ahead of us: a challenging morning of having to pitch our idea and prototype in the London Eye. We took another bus from St. Pancras to London riverside, near the London Eye, and we set our new temporary base camp in a cultural center nearby. Our category was the last to present, so we had to wait about two hours, rehearsing the presentation and preparing mentally. Finally, we went together with the other teams within our category to get inside that big wheel, the tallest building in London. The moment came, and I think we did a really good job. 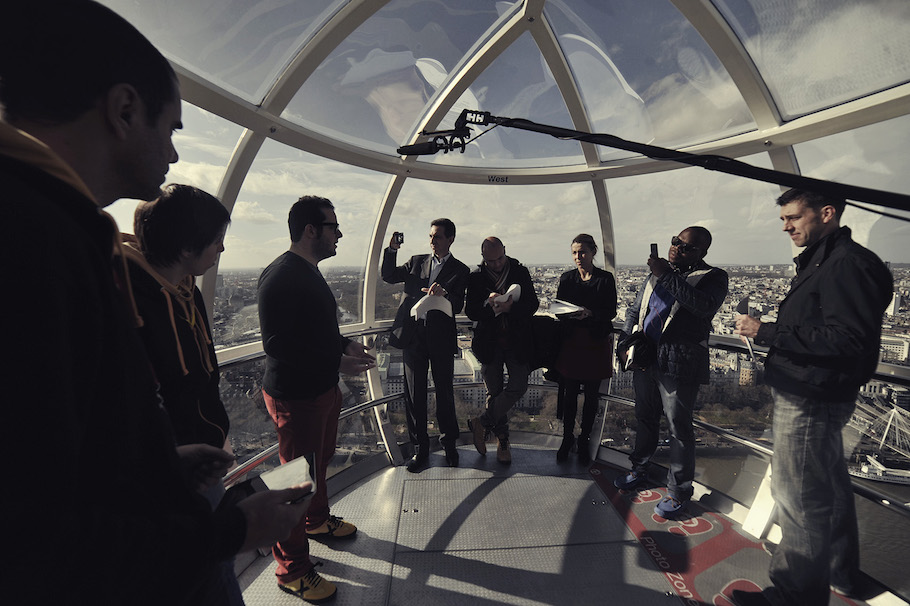 Shortly after that, we came back to our base camp, rested for a bit, had a beer, and then we were invited to go to the small prize ceremony. We did not win, but the level of all projects was really high and, anyway, the experience had been indeed awesome either way. The three musicians performed two amazing songs that they composed, like we did, during the entire journey, and we were given a couple hours to grab some lunch and rest. Honestly, after grabbing a bite, we were so destroyed that we just waited for the bus to pick us up.

So we got into a bus that, after a bit over an hour, left us at the Southend Airport Hotel, in Essex, really near to the airport. We rested a bit more, then had dinner, and all the eight teams that didn’t win had the chance to perform their pitch again for an extra spot in the final presentation on Monday, at the 4 Years From Now section of the Mobile World Congress. We went to sleep early, got some breakfast after waking up, and headed to the airport in order to get back to Barcelona.

Tired and amazed after the intense experience, we landed at Barcelona airport and headed to Plaça Espanya, right next to the Mobile World Congress venue. And after having lunch brought by Uber Eats, we went inside the 4 Years From Now congress, sat down, and waited for the big final presentation to begin. All four winners and the extra team presented, the musicians performed their two songs too, and the Imagine Express 2015 came to an end as the counter hit 0. 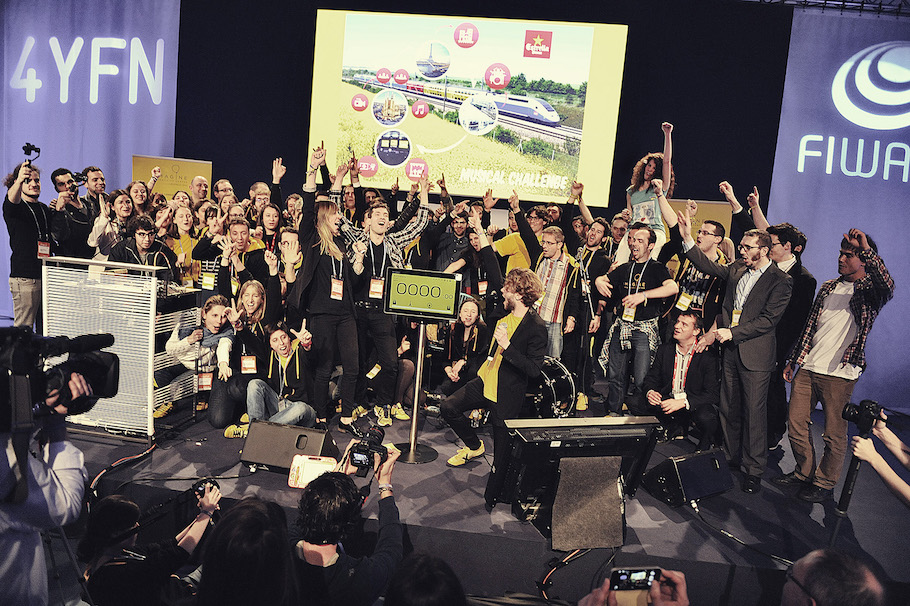 Not much left to do. We picked our luggage, said goodbye to the others, and I went back home to get a earned good sleep after this unbelievable, once-in-a-lifetime experience. Thanks to all the organizers and the rest of the staff and, of course, to the other people that, like me, participated in this adventure!

All the pictures are taken from great photographers that accompanied us through the whole journey. Thanks to them!