A shortlist of my favorite songs around, and how they (and I) got there.

Music is a marvelous thing. We do not know exactly why, but it transmits a kind of energy that can influence you heavily in a wide range of distinct ways. It can make you forget a bad moment as you start dancing crazily; remember that broken love you had a lot of years ago; focus blindly on whatever you are doing at the moment; or run the extra mile when you are about to pass off. It can ease your way into some kind of transcension that you could not get any other way, changing your mood for the day. Even the same song can affect several people differently!

As a youngster I was aware of music for the first time, but it did not change my life, I would say. Or yet, at least. My parents would play Bee Gees (their favorites!) and Paul McCartney vinyls at home, and I liked them. In road trips, they played from music for children in my earliest years to tapes from widely known artists like Elton John (including the incredible Lion King soundtrack) and local bands like Sopa de Cabra or Sau, which to this day is still my favorite Catalan one. I also remember very clearly playing Monopoly with Queen’s amazing Made in Heaven CD in the background.

Years later, I used to spend a lot of time with my best friend. His brother, ten years older, had left him some cassettes with really good music. When we were not playing videogames, we used to listen to them; I barely remember listening to Mark Knopfler, Radiohead, Pet Shop Boys and a lot of The Beatles - he was a great fan. His dad is quite an audophile, too, and I even started to be aware of opera.

To The Tape and beyond

When we got around in his dad’s car, he had this mix tape inside the tray, always on. It mainly had Spandau Ballet, Nik Kershaw, Paul McCartney and The Beatles, and we always listened to it without getting bored at all. We called it The Tape: I wonder where it is now. With my friend, we dicovered a lot of bands from the 80s and 90s and even got to know italo disco a lot. Nowadays, I don’t listen to it that much, but I’m very fond of those days.

Something had clicked inside me, and I started to devour music on my own. My friend had been the starting point, and I had an internal urge to get to know more and more. Internet helped a lot, allowing me to reach a variety that I could not have dreamed of. I went through commercial pop music from the early 2000s, italo disco, classic rock, adult contemporary, indie, opera, all kinds of soundtracks, alternative and many more. And I always wanted more. 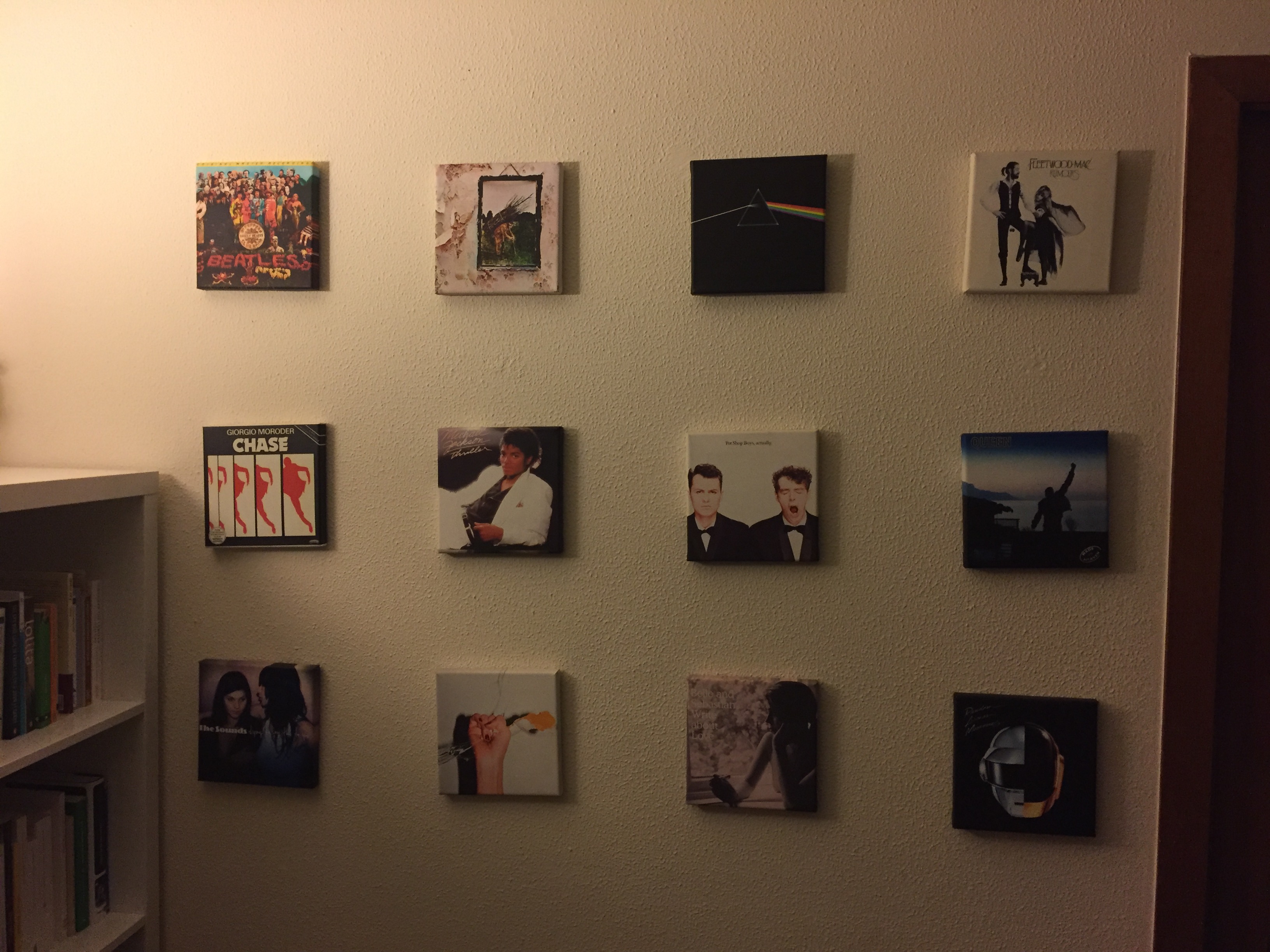 Just a few years ago, I wanted to decorate the white walls of my new apartment and, amongst other things, I hanged a grid of meaningful albums to me. But I had to think which ones, which resulted in me spending weeks trying to decide which twelve albums would I print and leave in my wall forever, constantly updating a list I had in my phone. The result is the picture above, if you scroll a little. Funnily enough, though, I recently printed four more and I have to update my wall, which made me think.

After half of my life listening to music almost compulsively, I feel that I have more to listen than ever, and I like to think that the wall taught me that. You will never know all the music for the rest of your life, and that’s terrific!

I try to listen to new bands and albums every month, even if it turns out I don’t like some of them: sometimes I am lucky enough to find artists I love and welcome to my collection. Ideas come from friends, soundtracks in movies or shows that I watch, Wikipedia articles that I find after navigating for hours, or even reading books about an artist or genre. This last way is particularly delightful.

The same way I was thinking about making a list of the TV shows I had seen (the result is the last post), the other day I asked myself a really silly question: Which ten songs would I pick from all the ones I have ever listened?. I accepted the challenge, and I have a quite advanced draft.

But instead of just writing a cold, heartless list out of the blue, I will try to justify my choices and defend that specific song’s presence in my shortlist. Thus, the next weeks I will be telling you, if I had the dreadful power to erase all but ten songs in the entire world, which ones would remain.

If my wall is right, though, in some years time I will have to update this list, maybe from scratch!

You can find the tenth song here. A clue: it’s from the eighties.

←
Managing my TV show complexity →
10th - I Ran, by A Flock of Seagulls