This is the seventh installment of a series of posts about my favorite songs in all history. You can find the introduction here.

Welcome to the world of synthesizers.

For me and this song, everything started around ten years ago. I read Midnight Express, an old book that my dad had bought in the early eigthies which, since we moved to the house, was in his library. A Spanish translation (El Expreso de Medianoche) from the 1977 original, it is a shocking autobiography from Billy Hayes, an American student who was sent to several prisons (even a mental institution) after being caught smuggling hashish out of Turkey.

I really liked the book, and then my sister made me aware that there was a film adaptation from it. In fact, it was released in 1978, the year after Hayes published his memoir. So I got my hands on a copy of the movie and watched it, and was absolutely mesmerized by it. Not only by the movie (which was very good, although a bit of an exagerated, Hollywood-esque version of the story), but mainly due to the central song of the soundtrack.

That song was Chase, by Giorgio Moroder.

“I was living in a little town”

Giorgio Moroder, now 77, was born in 1940 in Urtijëi (Ortisei, in Italian), a small town in South Tyrol, Northern Italy, very close to the Alps. He started having a huge interest in music by his mid-teens, and soon he would start composing and singing songs in Germany.

Eventually, he started gaining notoriety by his late 20s and started working profusely in studios, apart from releasing his own records. Only in the 1969-1973 he published up to five, the most notorious of them being Son of My Father (1972), a collaboration (one of many) with Pete Bellotte. He had been using synthesizers and vocoders (which then were truly futuristic instruments) for a while, and went using more and more in his albums.

In this direction was From Here To Eternity (1977), the first hit ever produced entirely on a synthesizer backing track, which was quickly followed a few weeks after by the adored and well-known disco hit I feel love, sang by Donna Summer and produced by Moroder. The following year, to complete this trio of hits, our beloved Chase was released and ended up winning an Academy Award for Best Original Score. His first Oscar.

The last years of the seventies saw Giorgio Moroder rise to the top of electronic and disco music. He published the soundtrack for Battlestar Galactica (1979) and continued releasing records like E=MC2 (1979) and three albums he distributed under the Munich Machine name, but then focused on what made him most famous: producing music for soundtracks and well-known artists.

So many eigthies soundtracks are crafted by him. Starting with Richard Gere’s famous American Gigolo (1980), continuing with Cat People (1982, including David Bowie’s memorable track of the same name, which also appeared in Tarantino’s Inglorious Basterds in 2009) or Flashdance (1983, with Irene Cara’s almost mythical What a Feeling). Also his are Scarface (1983, containing the amazing Push it to the limit in collaboration with Paul Engermann), The NeverEnding Story (1984, with Limahl performing the main song) or Over the Top (1987, starring Sylverster Stallone).

From this decade, he won his other two Academy Awards, for Best Original Song: Flashdance… What a Feeling in Flashdance (1983) and Take My Breath Away in Top Gun (1986).

Regarding artists with which he collaborated, the list is very long too. The most obvious is Donna Summer, for which he produced more than half of her albums: up until nine from 1974 to 1981. Together (see below), they would release I Feel Love, often described as the start of electronic dance music, as well as other singles as Love to Love You Baby (famous for the moaning and its 17 minute version), Hot Stuff, On the Radio or Last Dance. Thanks to this, they even got honorific nicknames: Father of Disco for Moroder, and Queen of Disco for Summer. 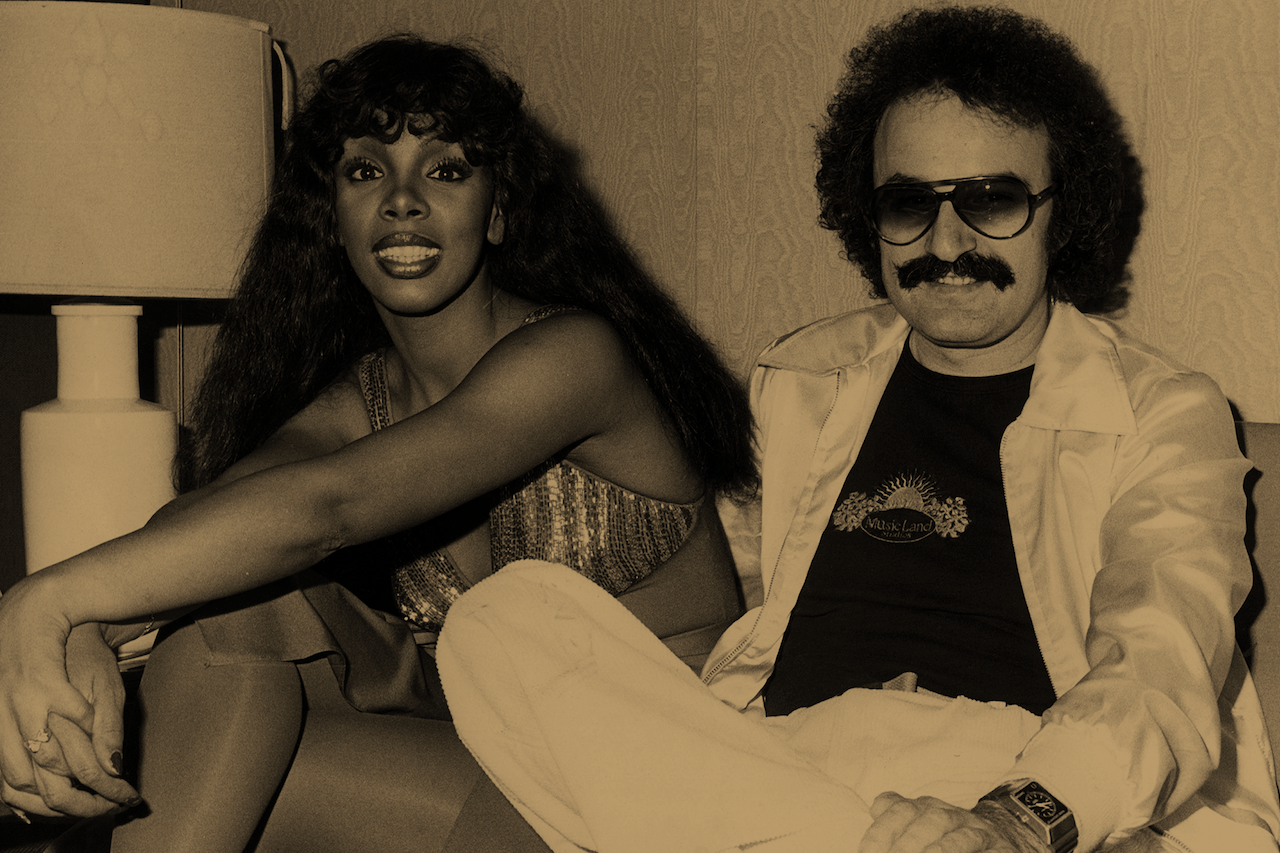 The list of related artists continues with Blondie and their flagship Call Me, Philip Oakey’s Together in Electric Dreams (released in an album together with Giorgio Moroder in 1985), Kylie Minogue, Janet Jackson or Bonnie Tyler. Plus, he had established a pioneering recording studio (Musicland Studios) in Munich in the late sixties, which was used by bands like The Rolling Stones, Led Zeppelin or Queen.

Olympic Games, World Cups and others

Moroder has always liked doing varied work. And soundtracks are not the only example: he wrote the official score for two Olympic Games (Los Angeles ‘84 and Seoul ‘88) and a Football World Cup (Italy ‘90), designed a supercar (the Cizeta Moroder) with a few of ex-Lamborghini engineers, created his cognac liquor and studied architectural design on his own. Not bad for a boy from a little town.

After his hugely successful late seventies and the whole eigthies, and maybe not fully aware of how great his footprint would be in electronic music, he stopped actively working in music and enter two decades of silence. That is, until two robots asked him for another collaboration.

Back to the future

In the beginning of this decade I already knew Giorgio Moroder and was a huge follower of his music. This is why, after reading in the news that he was collaborating with Daft Punk in their next album, I was shocked and very, very excited to live music from Giorgio Moroder when it was released, not decades after. And I clearly remember the release of Random Access Memories: I sat down in the sofa, closed my eyes and listen to the 9-minute Giorgio by Moroder end to end. I was amazed.

Apart from that (and quite thanks to it), Moroder’s career was reactivated immediately, releasing the soundtrack for Google’s game experiment Racer and, after 23 years since the last one, another album: Déjà Vu (2015), with stars like Sia or Britney Spears. He now DJs live (something he did not like in the past) in gigs like this one in Deep Space (NYC) for the Red Bull Music Academy Radio.

On the summer of 2019, I was very lucky to finally see him live. He came to Barcelona the 22th of june, to play at the Jardins de Pedralbes Festival. It was an amazing hour and so where he DJ’d over the most known records of all his career. Fantastic! 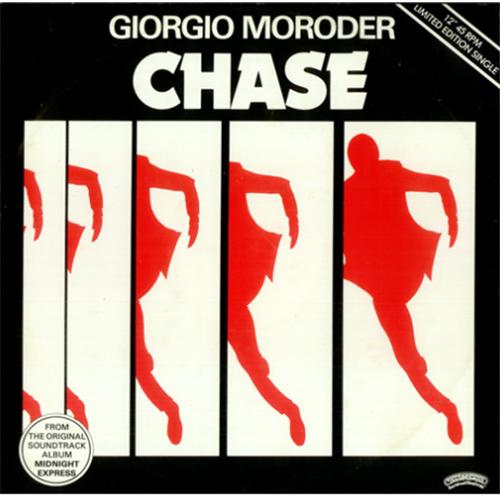 Released almost forty years ago, Chase does a perfect job as a soundtrack song: put the spectator inside the movie. This song plays as the main character (Billy Hayes) is followed by the police in the middle of the streets of Istanbul, zig zagging through street merchants and market animals. Inside Hayes’ head, it’s a primary battle between palpable tension (Will they spot me?) and wide open adrenaline (I think they saw me!), and Giorgio Moroder’s song is a magnificent representation of it.

The track is quite simple, but that’s almost as if Moroder wanted us to feel the main character’s fear and the slow thought that comes with it. The two elements in Billy Hayes’ internal battle are masterfully printed here: a tension part with a heavy synthesizer use and an adrenaline part with an electric piano playing the melody; both, combined and intertwined across the whole song to create a unique feeling.

You can listen to the original maxi version (at 13:06 total!) just below. I really hope you enjoy it!

The fouth song, a punk-rock track from a brief but amazing band, will be out… song enough!